Hi. I would like to suggest Chromecast support. On windows PC I could just use the Chromecast built into Chrome, but on mobile is where I really want it.
What I’m looking for in a DAM is something I can access on my PCs and Android devices (iOS would be a bonus) that I can then find photos I want easily and then Chromecast them to my TV. So far Photo structure is looking good and future updates at some stage will add the niceties like have face detection etc that I also want. But Chromecast is the top of my requirements. Mirroring my devices screen is a way to get around this, but I find this clunky and especially with video, not very reliable.
Thanks
David

Note that you can technically do this right now, if you use Chrome on your android device, and point it to the PhotoStructure instance running on your LAN: then just click the “cast” button.

A beta user did some preliminary research for me to implement this as a native chromecast channel (which wouldn’t require an android device to “drive” the UI):

A sender. There is a JS framework. Integrate Cast SDK into Your Chrome App  |  Google Developers Requires the user to be running Chrome. As best as I can understand, the Chrome App, is just a webapp. Fortunately, you’re already doing that on port

A receiver. To support images appears to need a custom receiver. Again, this is also a JS app.

If your app provides content such as an image gallery, requires DRM, or custom business logic, then you need to build a custom receiver application. A custom receiver is an HTML5 app that you host on your own servers and that must be implemented using the JavaScript CAF Receiver API.

For details about how to build your receiver application with the Receiver API, see the Create a Basic CAF Receiver guide.

Another beta user wrote this blog post (complete with demo): 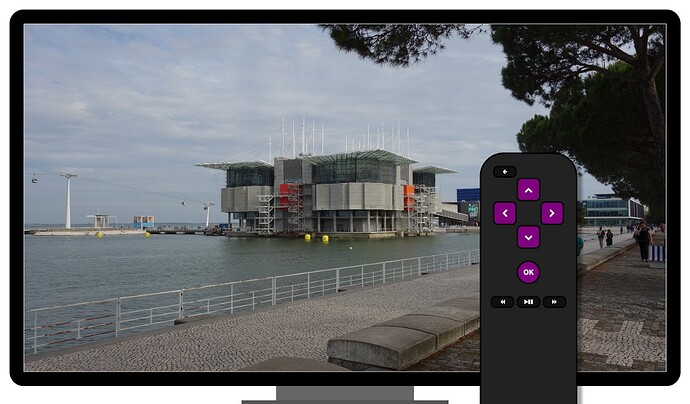 Wanted: My photo library on a connected TV

One of the biggest missing pieces in personal photo management: the screensaver / slideshow

As an aside, I’m a bit hesitant to build on (any!) Google API, given how joyfully they kill their own products, but at least for now, it seems to be the simplest way to broadcast to a TV.

Thanks very much for the detailed post. I can understand your reluctance to build on any Google API, seeing how they do kill products quite often. I’ve worked in IT/Support for 17 years and have seen some of our devs build on platforms that they think will have a longish life, but are depreciated a year or 2 later. So I very much understand.

As far as I understand you can’t cast from android chrome, so that won’t work. If you could it would wonderful. But you have to go into Google Home and share your screen with the chromecast. I’m happy to be proven wrong if there is another way. I’ve just found especially with videos, screen sharing to chromecast is not ideal.

I’ll check out the Photo library on a connected TV post. Thanks for the suggestion.

Good luck with the project. It looks great and I really like your philosophy behind it. You might still have me as a paying customer going forward when you go into production.

you can’t cast from android chrome, so that won’t work

I wonder what’s different between my setup and yours? My Google Pixel 1, 2, 4 and OnePlus 7 Pro all have a “Screen Cast” toggle in the quick-settings (available from pulling down from the top menu bar), where you can share the (entire) screen. I only have ancient Chromecasts (the black HDMI sticks), fwiw.

If you click “Add to Home screen” from your mobile’s Chrome or Firefox, when logged into your LAN’s PhotoStructure instance, and then launch the browser from that home-screen bookmark, it’ll hide the URL titlebar, too.

Hmmm. I’ve got a HTC U11, Samsung A8 and a Vivo Y11 in the house and none of those have a “Screen Cast” toggle in the quick settings. Googling it, it seems to be screen mirroring, not sure if it’s the same way screen mirroring is done in Google Home app, but I would think they would be similar.
Pixel : Project your Pixel phone's screen - Pixel Phone Help
Android in general : Cast a Chrome tab on your TV - Android - Chromecast Help

A new user asked for NVIDIA Shield support today, and we discussed options: seems that the above chromecast receiver would still be the best option for Android TV.