Exiftool dependency failed during upgrade to 1.0.0b4

Stopped PS Node 1.0.0b3, then when starting it I think this is the 1.0.0b4 update, received errors about dependencies: 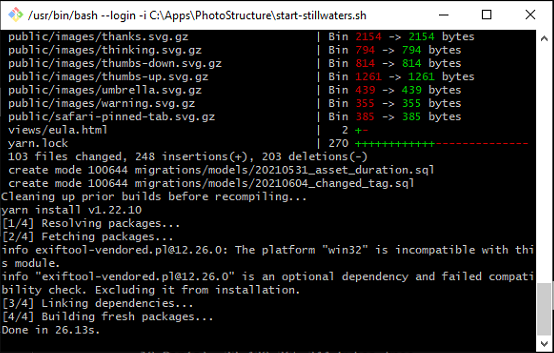 That’s actually an expected (!!) info message: exiftool-vendored (which I wrote) needs either exiftool-for-windows, or exiftool-for-everyone-else, and npm's optionalDependency seems to be the only way to support cross-platform dependencies. Unfortunately, this (a bit scary, and not well-worded) error message is emitted by npm. The alternative is to make a “fat” dependency that includes both windows binaries and perl binaries in one dependency (which, now that I think about it, maybe wouldn’t be so bad? I’ll think about this some more.)

Did it launch and run properly?

Sweet as, thought I should post it in case anything was affected in the upgrade by that message. Upgrade all seems to have gone fine. Glad to know it’s safe to ignore!
Ta

I’ve added a --quiet to the yarn install to beta.5 so these messages don’t bother anyone else in the future.

(update: I just pushed beta.6 with only a dockerignore change. This change will come out on beta.7 which should come out today)