How do I adjust how busy PhotoStructure makes my computer?

I’m a recent convert. I’m importing my Google Photos library and the import is crippling my server with ffmpeg (I assume transcoding video files) 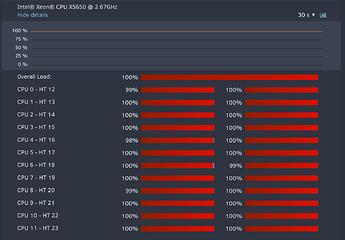 I have the cpuLoadPercent=75 (default value), but I’m not sure it affects ffmpeg.

I read through the ffmpegThreads notes, and I don’t think it’s what I’m looking for.

Thanks for an amazing product!

This is a goal of system utilization–PhotoStructure won’t enqueue additional work if overall system load is higher than this value, but if the work was already enqueued, the system utilization may exceed this while the currently-enqueued work completes.

This setting may be better for you. For a 12 core hyperthreaded CPU, try maybe 8 or 12? That’ll only import at most 8 or 12 files concurrently.

Know that photo and video files are placed on two different work queues–only one video file is processed at a time so there should only be, at most, one ffmpeg transcode operation running at any given time.

This only affects video transcoding, and defaults to a fraction of available CPUs. As of Dec 2022, the default is:

The last setting is what priority should PhotoStructure renice subprocesses to–this defaults to BelowNormal, which is the same as renice -9.

Switching to Idle may result in spurious timeouts, as the OS won’t schedule work for renice -19 procs unless the system is mostly quiescent.