PhotoStructure is an “indy” project – an independent, solo developer (me!), paid for with subscription revenues from you (thank you, subscribers!).

I’ve had a couple people ask how PhotoStructure is developed, so I figured I’d write it down.

PhotoStructure has a ton of different builds to support cross-platform libraries:

This means testing is a bit of a bear, and requires a bunch of hardware. I have:

Given how many different environments PhotoStructure has to support, I try to rely on automated tests to highlight defects before users see them–so PhotoStructure’s “test coverage” is pretty thorough.

This is in addition to all the tests I wrote for the open-source components of PhotoStructure, batch-cluster and exiftool-vendored.

As I develop I have mocha in --watch mode running on another monitor, and it tells me if there are tests that I’ve either newly broken or are no longer correct.

When users find issues, I try to write a breaking test that reproduces their error, and then fix the implementation to make the test pass.

For every new codepath commit, I try to have at least a couple new tests to verify behavior.

. After every git commit, all that hardware runs all the above tests.

GitHub Actions provides a report for what parts of the Continuous Integration matrix passed or failed, and specifically what and how any given part failed. 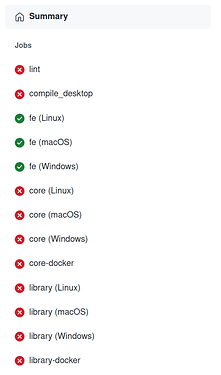 I only release stable builds when the entire CI matrix passes.