How to manage multiple users/accounts?

As Google Photos’ service clearance time is approaching quickly, I’m looking for the best alternative to self-host my photos as well as the ones from several family members.
PS is a great substitute, for my own usage, but I’d like each of the members to have their own private libraries. I don’t think that the current plans to implement the multi-user support will match to what I’m looking for.

So my questions are:

I think this is what Daniel was really asking: that he wanted one library, but with retained file ownership and access authorizations.

In prior sharing discussions, I’d tried to simplify the design by completely avoiding “users”. Access to a tag or asset would only be via a share token:

What you guys are saying is that PhotoStructure really need users, where each user has a role, and permissions to an asset or tag should be granted to users, rather than simply using access tokens. Something like this: 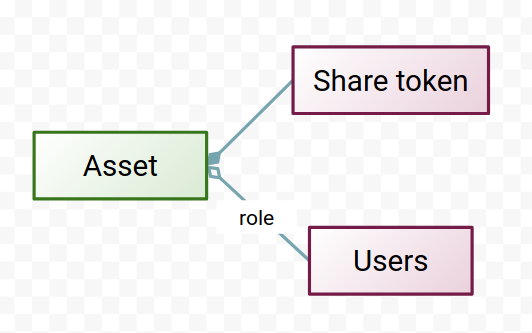 Where “role” is something like “owners”, “contributors”, and “viewers”:

If an asset has no associated user, it defaults to the library owner(s).

There are a couple things to think about here:

PhotoStructure would need CAP_CHOWN to copy files into the library across volumes and retain prior user/group file ownership. I’m not aware of an equivalent on macOS or Windows.

This would require PhotoStructure to run as an admin, which is not acceptable, which is why this option isn’t acceptable.

If asset ownership could be inferred and stored as metadata:

(I don’t think the idea of “visitor” or “contributor” makes sense for a whole library: what do you think?)

To get your desired feature of having a single PhotoStructure library support several different users, each with their own private library: you’d have one “admin” user, but normally log in with your “normal” user that only has access to your files.

A reasonable future feature would be allowing users to share ownership of an asset or group of assets with someone else via the UI.

We need a mapping between externally authenticated users and internal PhotoStructure users to grant those users their roles.

Hum, not sure what Daniel was thinking. My guess was that he wanted him and his wife to have access to a common library, but each with different permissions to manage their pictures (admin would have all the rights -rw-, others would only be allowed to access the galleries, no edition). But I re-read the thread and, yeah, he was probably asking for exclusive rights for each user.

Hum, not sure what Daniel was thinking.

I think what I really want is this:

Yeah, this is just like what my family needs: with the need to share albums to extended family members.

So, I don’t think you two are asking for different things. I switch this topic to be a question, rather than a feature request, so people don’t vote on this and the other topic.

I don’t want to browbeat you, but as Google Photos free service is very near to the end, do you have a plan on releasing something about the multi-user management ? I see lots of users looking for a viable alternative, but only few options exist. Yours has the potential to beat them all, once that important feature will be available (with batch move/delete/share options

releasing something about the multi-user management

Given that this feature has 0 votes, I don’t think there’s huge demand for it, specifically. (I’d personally find it handy, though, so I’m interested in building it).

FWIW, I’m trying to get the highest-voted-on features shipped ASAP.

with this user approach, i think the “user” should have the ability to upload their own photos via the web ui and also have access to the photos shared with them. In the storage possibly having users separated into different folders.

thanks this satisfies me, but should I use resilio sync in this scenario ? or just an alternative, I use Gs Richcopy 360 , will it works?