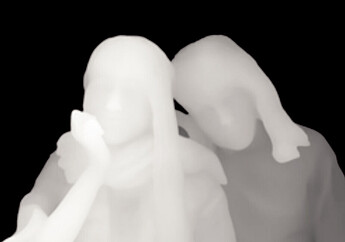 Newer iPhones may store a depth map as a rastered embedded JPEG, associated to MPImage2 and MPImage3 embedded images in the metadata headers.

PhotoStructure v0.9.1 uses the embedded MPImage3 thumbnails, if they exist and are of sufficient quality, to generate preview images, instead of using the original image, to help make preview generation faster.

I made this change because several newer dSLR and mirrorless cameras (that pop out 48MP+ images) include these MPImage3 preview images in their RAW images. Using these let PhotoStructure skip rasterizing those gigantic RAW files (which could take 10-20 seconds on slower computers).

The fix (for the future)

The next version of PhotoStructure will not bother looking at these preview images if the source image is 15MP or less or the Make is Apple.

I’ll also add a new library setting that lists what embedded images PhotoStructure can look at.

The workaround (for now)

Until the next version of PhotoStructure is released, set the useEmbeddedPreviews library setting to false and re-sync these assets (just visit the asset with the asset info panel open should do it).

If they don’t, please let me know!