Not importing files from external drive

The directories I have configured for input are: 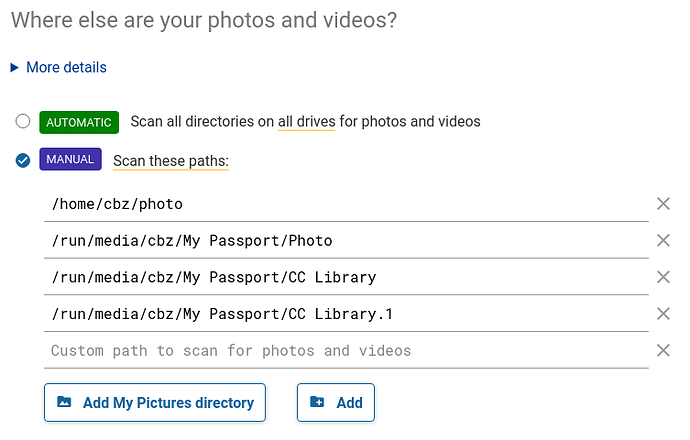 The external drive is mounted and is picked up by Photostructure:

I did notice that when Photostructure was done importing from /home/cbz/photo, it showed very briefly some (maybe all) of the other folders and said “Done.” No files were imported from any of those folders.

None of the other folders contain a nomedia file and their names do not begin with a period.

I see that the other folders do show up in the progress table in the database but they just say “Done” and the difference between the createdAt and completedAt timestamps is less than 10 milliseconds.

Any suggestions? I tried symlinking those directories inside /home/cbz/photo since that directory was getting imported but that didn’t help either. What am I missing?

The easiest way to debug import issues is to use the info tool (it’s actually why I wrote it).

Note that the “rejected” section must be empty in order to be eligible to be imported into your library.

Hallo @cbz, did you find the solution for your problem? I am having the same problem. I connected an external disk to my ubuntu server with Photostructure-for-servers but It does not find the disk. I tried to look at the logfile but could not find any hints.