I expect it to complete the scan

Processing, less than a minute remains
Processed 58619 photos, 123 videos. 1 remain to be processed.

It seem to be stuck at that 1 item and not progressing forward,

Sorry you have a sync glitch. I wrote a ton of code around trying to avoid exactly this situation:

So. Something is still slipping through the cracks here.

If you have time and want to help me debug what happened:

The instructions for how to do this are here: https://photostructure.com/faq/error-reports/#how-to-manually-send-your-logs

If you just want to scan your other drives, go into your settings page, and instead of using “automatic”, use “manual”, and add the other drive letters (or directories) that you want to import. It’ll look like this: 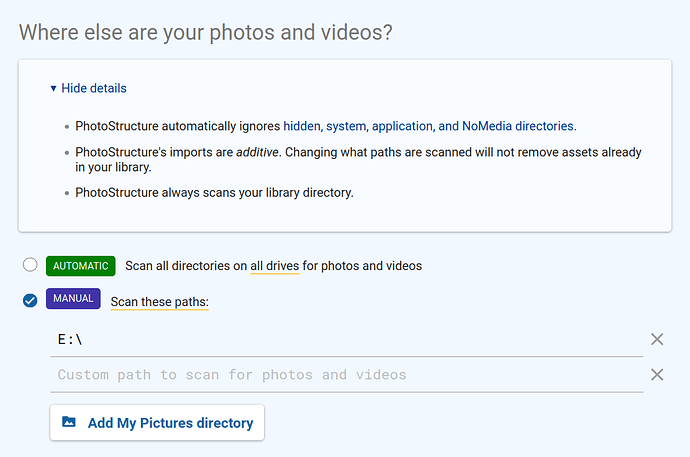 Thanks for getting back.

I had already done Option B which is currently still scanning.
I would still like to help debug this, would I be able to do so once the manual scanning is completed?

Another issue I’m encountering is that Canon Raw files (.CR2) are not detected / added to the library
Isn’t this supposed to be supported in v 1.1?

No apologies, that’s what this forum is for! Yes. The thumbnails and preview images are JPEGs that live in your PhotoStructure library. See https://photostructure.com/faq/library/#where-are-my-librarys-database-settings-and-preview-files Rendering is all done at import time to make browsing fast. V0.9.1 uses dcraw, which supports many raw formats. v1.0 (which I hope to have alpha releases ready in a week or two) switched to libraw, which supports many more recent raw formats. The only r…

Am I missing something?

I expect most (not all) .CR2 files to be importable by PhotoStructure v1.1.

Note that Canon uses .CR2 and .CR3 to represent a couple (!!) of different RAW formats. Version 1.1 of PhotoStructure uses dcraw, which only supports an older .CR2 format variant.

I updated PhotoStructure in version 2.1 and later to use a custom build of LibRaw, which should work for the newer Canon cameras.

If you want to try the alpha build of v2.1, that should resolve the issue.

I’m working through the bugs found in alpha before I release v2.1–please have current backups if you try an alpha (or beta!) build (but really, backups are always a good idea!)

Thanks,
I’m not sure my camera qualifies as newer Canon,
It’s a Canon 20D and the photos are from 2005 2006
You think alpha 2.1 would help?
I’ll upgrade if you think it would, but from the sound of it, the upgrade would help for newer .CR3 files.

As for backup, is sqlite3 db backup sufficient or do I need to backup the entire .photostructure folder (Windows 11)?

Hmm, those should import just fine with v1.1. Can you email me (support@photostructure.com) an example .CR2 file that doesn’t have any private content, and isn’t importing, so I can take a look?

Sure can,
Just to be clear what you mean by private content, you want me to strip out the exif data? it has some personal information like Name / Serial number …
Or more about the photo content?
As long as it is not shared publicly, I have no problems sending it to you as is, I’d assume you’d want the exif data intact.

you want me to strip out the exif data?

No, please email the original file if possible.

I’ll delete the file as soon as we debug the issue, so it’ll stay private. I just don’t want people sending anything with content that they’d consider sensitive.

Any update on this?
Thanks

Sorry for the response delay!

I just tried importing the CR2 you sent me on Ubuntu with the v2.1 alpha build, and it imported fine. I’ll try on windows next.

I just bumped out your trial by a month–I hope to have v2.1 shipped by then.

Thank you very much, appreciated.
I look forward to 2.1

I’m following up on this, has Photostructure v2.1 released? If not any rough ETA?
Thanks

2.1.0-alpha.7 was released on 7/27 (see post below). If you mean a release of a so-called “stable” 2.1.0 that could be while still. I would not wait for it, try the alpha.7 release, in my opinion it’s not any less stable than the stable release (which is now a year old) and has A LOT of worthwhile improvements.

Thanks
I installed the 2.1.0 alpha yesterday.
After several hours, nothing changed in terms of previously undiscovered images.
I did a slow rebuild, and now the number of the discovered images is around 50% of what it used to be.
And every time I check I get the following message even after waiting several hours.

I’m not sure if this is license related or a bug.
This is what I see when I click on the hamburger menu

not sure if this is license related or a bug

It shouldn’t be license related: both LITE and PLUS should both sync and rebuild libraries reliably. The only difference should be the PLUS-only features (like auto organization) will be available if you have PLUS.

If you have time, can you follow “Option A” and send me your logs? There’s a chance I can determine what’s amiss with PhotoStructure on your machine if you share those.

It looks like it is progressing, it now says 2 hours remain, and Refreshing assets and previews count is decreasing.
I’ll check again when that reaches 0
If it gets stuck, I’ll do the Option A
When the count reaches 0 should I expect cr2 files to be added automatically? or should I set something for that to work?

A rebuild won’t pick up new assets: it just revisits all existing files in your current library, rebuilds metadata, re-aggregates, and rebuilds previews. A sync will pick up new files on the filesystem: 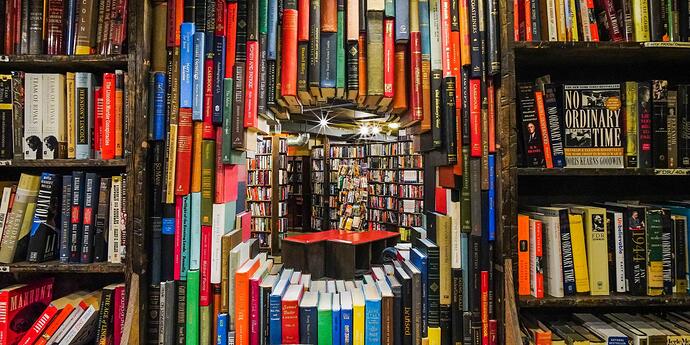 Sorry for novice questions and feedback.
After all the rebuild is finished, the When group is now show 280, down from some 34k images.

Not sure if I did something wrong or not.

This is my configuration

Next I did Sync | restart Sync
It displayed the following 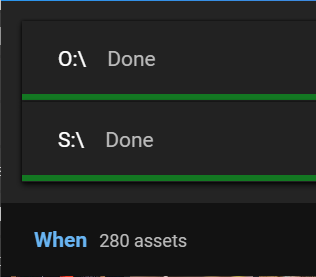 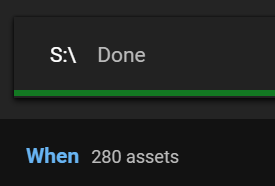 What happened to the H:\ why didn’t it process it?
Why did the When group ended up with 280 images?

Whereas Camera group has some 13K

No way these images are without the date data.
Where do I see the total of all images in the Library?

And lastly, I still don’t see the cr2 files

Thanks, and sorry for novice questions, I’m not finding the application intuitive enough to answer my own questions, and I’m not a novice to computers / software …