I was doing an initial scan.

Application stopped then I received a notification that Bitdefender saying "Disinfection in progress, Detected threat is being disinfected. Please wait until the process is complete" 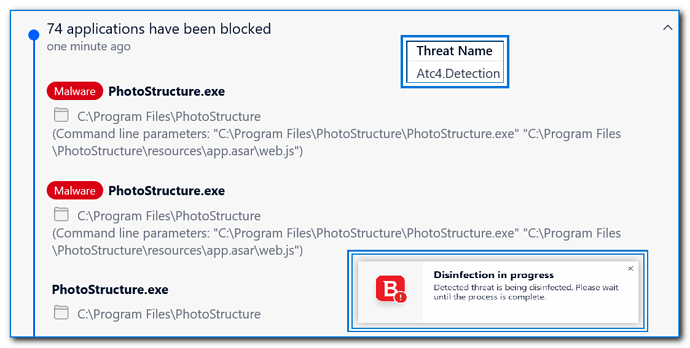 I am aware that I’m using a beta version and the potential that I may not have these issues with the stable version.

1. After the first incident I researched this as a known issue on your forum I proceeded to restore all files from quarantine and stopped Bitdefender from detecting it in future scans.

2. I restarted PhotoStructure and it hung on the splash screen for several minutes. I closed that window and made several other attempts, which all failed.

3. Since my PC has been running all day, I rebooted it and made another attempt to open the application, however it again failed. I used my uninstaller app to uninstall it completely, deleted all folders and residue.

4. I reinstalled the application and again attempted to do an initial scan. All previous results were identical… Bitdefender killed it again. I will next attempt to block Bitdefender or add it as an exception. 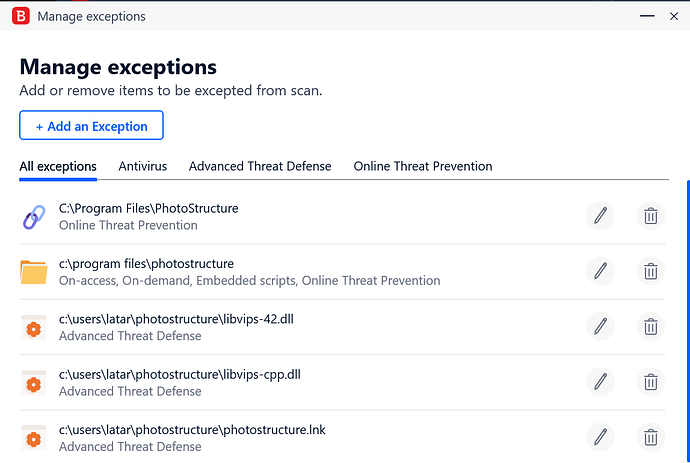 6. I closed the window then tried to open it again, then decided to check task manager and found it running in 3 instanced. I killed them all then tried again to open the application, it failed. Uninstalled the beta version.

Sorry about that! Please see:

Thanks for reporting. I’ve had several beta users have reported issues with PhotoStructure on Windows when using third-party antivirus/antimalware packages. Due to these false-positives, and the fact that these software packages have a history of security issues themselves, PhotoStructure on Windows is only supported when used with Microsoft Defender Antivirus. Microsoft Defender Antivirus is the free and built-in antivirus for Windows 10 that was previously called Windows Defender. I recomm…