Question about how PS carries out sync jobs

First off, if you’ve drawn a pretty set of photos for exactly this just point me there with a link please!

My understanding, largely from this photo (below), is that the sync process will scan for asset in your non-ps photo library (I’ll call this the messy or unstructured library, mine is…) then for each asset it will run a sha and calculate a mean hash (used for comparisons between images/videos? - guessing a bit here). Then it will create the image’s (or videos) preview sizes/transcode it to be more web friendly, then (or perhaps before the previous step, it will actually pull all the metadata, store it in the db, then place the asset in the appropriate folder in the PS_Library. 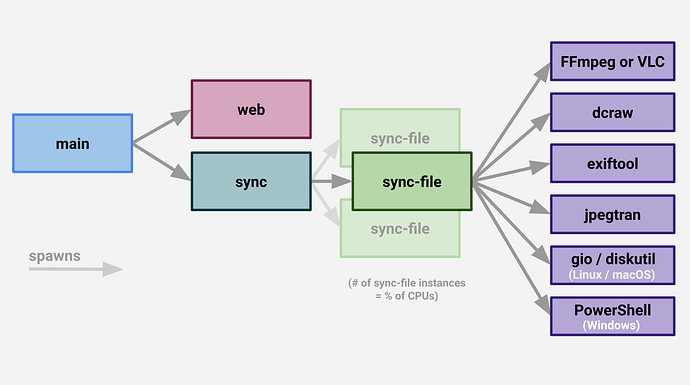 My main question
Where does it do each operation on the filesystems? I know there is a temp space that should be on SSD, is that where transcoding/converting/preview creation occurs? Does the hash happen there too, as well as metadata inspection?

The reason I’m asking this is to understand how I might better architect my setup to maximize my hardware’s usage. For example: If tmp really is where all the above occurs, and my messy library is coming off spinning disks and going TO spinning disks then that should prevent my spinning disks from having to handle the IOPS associated with hashing/converting then there likely isn’t much I can do to speed it up beyond faster SSD or maybe even a RAM disk (a little far fetched and would require PS to make a choice of where to conduct its operations, on an SSD or on the RAM disk).

Thank you in advance, and I do know that if it is all on SSD it’ll be blazing, but thats true for most things (look at the PS5’s SSD requirements for instance), however its also expensive

so I wanted to take another stab at seeing if I can tweak anything, move anything, that might speed up ingests. I realize eventually it will finish and I should hopefully not have to ingest again…however we DO have that ML feature coming in the future that might need a complete library scan

I haven’t drawn a picture of what syncs look like. Here’s a rough sketch:

sync-file processes are fed file paths, one at a time, to “process.” Processing a file involves:

That’s is great information! Thank you.

Where does the SHA get performed? On the remote library or in tmp? Same question for the conversions/transcode?

My question is really getting at utilizing the storage IO capabilities where appropriate. I’d much rather have PS copy an asset it’s analyzing to a tmp, RAM disk or ssd, then perform all actions on that asset then continue on its way. Now some folks wouldn’t want that, so I’m trying to understand if PS already does this to some extent and how.

Now for the tiny files (below 100MB) a RAM disk makes sense and doesn’t risk destroying an SSD and gives you access to IOPS that are way above anything my remote or local spinning disks can provide.

Where does the SHA get performed? On the remote library or in tmp?

The file is streamed from where ever it is.

Note that /ps/tmp is pretty much only used for raw image conversions (where I can’t tell it to stream to stdout). It used to be for exiftool embedded thumbnail extractions, but I figured out how to do that via streams (no interstitial temp file!)

ExifTool is smart enough to fseek to the “good bits” of a file, and not need to stream the whole thing off disk.

Image hashing (and previews!) frequently can use embedded jpegs, which means, again, a small fraction of the file is streamed off disk.