Sorry, creating a new conversation as my last one seems to be be falling on deaf ears for some reason.

My photos and videos have been importing for well over a week now (on 24/7) and I’m still several days off it finishing, going by the progress its made. 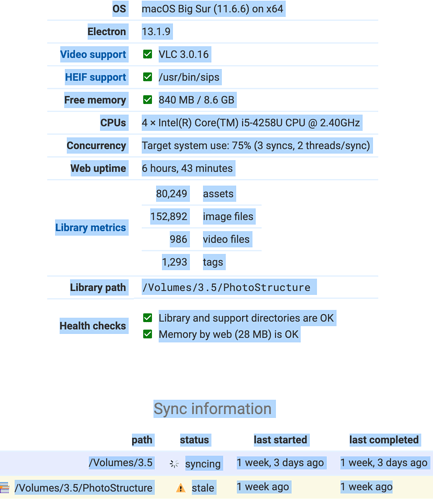 My previous conversation was that I may need a another ‘non stable’ build, but that there would be one potentially ready to use about 10 days ago but haven’t heard or seen anything about it since.

I’d also appreciate if someone could explain (I checked the FAQ’s) what the difference is between assets and photos/videos?

Just to tack on the last thing I’m not confident over, the library location for PhotoStructure is and has always been 1 location specified by me. However as you see in the screenshot, there are 2 libraries, one of which is stale as it states. How do I know where that info is to delete it so I don’t have a copy of 2 libraries etc… I can only see 1 location on the drive, its a bit misleading?

Apologies that I didn’t reply to the prior thread, thanks for the bump.

I’m ironing out the last cross-platform spec errors (PhotoStructure now has over 10,000 unit and integration tests!), and I like those to pass before I cut a release (even an alpha build).

macOS support is much improved in the v2 codebase–I’d try the alpha build (be sure to pick the correct installer for your computer architecture–looks like you’re running on an Intel mac).

what the difference is between assets and photos/videos

An “asset” is what you’re looking at in your PhotoStructure library. An asset is backed by one or more “variations” of a photo or video. More details are on this page: PhotoStructure | What are “Library metrics”?

It looks like the mountpoint and volume parsing on your mac is broken–there should (as you guessed) only one volume.

I’ve made a number of improvements to mountpoint and volume parsing in the v2 codebase–I suspect this bug should be fixed (and you should only see one path) if you run an alpha build with a new library.

Its been on the starting sync screen for about 10 hours. No progress bar but assuming its doing something? I’ve got another 22hrs until my trial runs out, I’m hoping I can see it working before then!

I’ve got another 22hrs until my trial runs out

I just bumped your trial out for a month–apologies for the glitches!